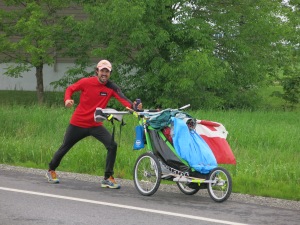 You’ll be right on the money when you call Jamie McDonald the marathon man. He’s attempting to run the equivalent of six marathons every seven days with a goal of reaching Vancouver, BC, in the autumn. Even by my sometimes shaky arithmetic he’s having a rest day every week. It makes sense to me.

Jamie is running across Canada to raise funds for the Toronto Sick Children’s Hospital and two children’s hospitals in Britain from whence he hails – Gloucester to be precise. He is paying back for the treatment he received as a child for a rare spinal condition.

I caught up to him just east of La Pocatière in the Lower St. Lawrence (Bas St-Laurent) region of Quebec while I was on a cycling trip with six friends. (My trip is called the Crustacean Cruise and the story will appear in the Montreal Gazette in late July.)

Jamie was pushing a stroller, loaded with his gear and a big Canadian flag, on the shoulder of Highway 132, the longest highway in Quebec. It runs alongside the St. Lawrence River through many old towns and villages, some founded as far back as the 1600s. He started the daunting journey in early March in St. John’s, NL, with a backpack and later switched to the stroller.

He describes himself as the fundraising adventurer and you can check out his videos at http://www.jamiemcdonald.org/. You can also make a donation on the web site.

Jamie is no stranger to long distance travel. He cycled from Bankok, Thailand, to his hometown a few years ago.

I have hiked and biked through Nepal, Cuba and Mexico. I also maintain a busy schedule of adventure traveling in Canada. Many stories in the blog were originally published in the Travel Section of The Montreal Gazette. My web site is: https://davestravelsblog.wordpress.com