It can be tough finding a little patch of wilderness in congested southern Ontario, the most densely populated region of Canada.

But Bronte Creek Provincial Park should qualify as wilderness if we alter our standards a bit. Despite the fact it is squeezed between a couple of suburban cities just west of Toronto, it is home to deer, fox and coyotes and there is fishing for trout, bass and salmon.

We set up camp here after a day of hard cycling from Niagara-on-the-Lake and we have the park all to ourselves a few days before the May 24 long weekend when hordes of campers will descend on the park for the unofficial start of summer.

We are sitting around the campfire after supper and peaking at us just over a berm are the roofs of houses in a nearby subdivision of Oakville.

It’s a rude adjustment for people used to more conventional signs of the wilderness such as the howling of wolves in Algonquin Park and the rough and tumble of untamed rivers in Quebec.

But this park has taken a stand as a wilderness oasis although it is wedged between superhighways and hard by a huge Petro-Canada refinery.

There is the creek, of course, with its fish (including salmon) and towering trees along with green fields which are a welcome respite from the noise and dust of the nearby civilization.

The park is one of several wilderness areas we encounter on a week-long cycling trip along the shore of Lake Ontario and the St. Lawrence River from Niagara-on-the-Lake in the heart of Ontario’s wine-making region to the Quebec border.

And it’s not an outlandish claim to make although we pass steel-making operations in Hamilton, auto-manufacturing plants, two nuclear power plants and have the constant company of Highway 401, the busiest highway in Canada.

Our plan was to follow the newly-inaugurated Waterfront Trail, all 730 kilometers of it, which is a minor miracle brought about by a group called the Waterfront Regeneration Trust. Among its accomplishments was winning the struggle to unite the efforts of 70 municipalities and other preservation groups to set up uniform signage making it relatively easy to follow.

The route is a bit of a mishmash using municipal bike paths, the shoulders of secondary highways and even some main streets, such as in Toronto and other cities and towns and there is bound to be some confusion.

But the cardinal rule to follow if a problem arises is to keep the water on the right when heading from Niagara to Quebec. Always.

You can bike it, you can stroll it, you can jog it and even paddle alongside it and we see plenty of people engaging in all those activities. The trail appears to be fulfilling its goal of giving people greater access to the lake, which has been badly abused over the decades.

Back to the lake

It’s not likely that the shoreline will return to its former state as a pristine wilderness, but there is a conscious effort going on to preserve what is left, fight against the further erosion of nature and bring people back to the lake.

Our group of five cyclists plus a driver in a support van start at Niagara-on-the-Lake, a fitting place because the town with buildings going back to the early 1800s has been beautifully restored. It has become a magnet for the culture vultures who appreciate the Shaw theatre festival and has become the centre of the Niagara Peninsula’s flourishing wine industry.

The rise of a quality wine industry (anyone remember Baby Duck?), the theatre scene and the regeneration of the lake along with its environment have the makings of an excellent partnership.

The lake and its shore may never regain the pristine beauty that the United Empire Loyalists saw more than 200 years ago when they arrived as refugees from the American Revolution, the first big wave of people of European ancestry that was to change the face of the lake and adjoining land.

But the success of the Waterfront Regeneration Trust’s efforts over the years can be seen in the great numbers of water birds – including Canada Geese, ducks and swans – that nest along the shore. 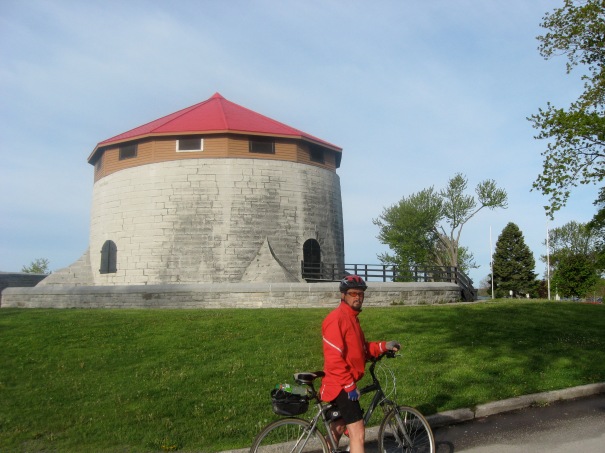 Doug Taylor stops in front of Murney Tower, part of the extensive fortifications of Kingston

And recreation on the water can’t be too bad either. We also see marinas packed with sailboats, cabin cruisers and motor boats for fishing.

Day 1: Our intrepid group encounters a steady stream of walkers, joggers and cyclists – and manyyoung mothers pushing strollers – taking in the beauty of the lake as we speed along the rejuvenated shore, covering about 100 kilometers a day.

We leave Niagara-on-the-Lake, ablaze in tree blossoms and tulips, and cruise along bike paths. Soon we move on to the highway with shoulders paved for cycling, sailing past the vineyards ready to bask in the summer sun.

All our gear, including a large cooler packed with bananas and beer, is in the van driven by Jean Boicey. Her mandate on the first morning is to load up at a local winery, in this case Peller Estates in Niagara-on-the-Lake. Some for consumption when we stop for the day, some for taking home.

We cross the Welland Canal, and the highway gives way to the residential streets of St. Catharines. Later, we drift along the shoulder of the service road of the Queen Elizabeth Way, the busy multi-lane expressway linking the lakeshore communities to Toronto.

Then comes Stoney Creek and the wide waterfront path of Hamilton, which runs beside a sandy beach to the Burlington Skyway. We cross the entrance to Hamilton Harbour, which leads to the blackened shore dominated by the steel mills on the bridge of Eastport Drive and continue on the beach path of Burlington.

We join the traffic of Lakeshore Rd. to Burloak Rd. on the western border of Oakville and turn north to Bronte Creek Provincial Park after pedaling 115 kilometers including a circuit of the park because we follow incorrect directions from a local city worker.

One of our number is squeezed by a truck going through the underpass at the QEW, but that inconvenience is wiped out by a courtesy extended to us the following day.

Day 2: On the way back to Lakeshore Rd. a van holds back the heavy traffic to allow us to go through the narrow tunnel unhindered. Safely on the other side, I give him the thumbs up as he overtakes us and he waves back.

In general, we find Ontario motorists to be accommodating and considerate while travelling the busy streets of Toronto and on highways with narrow shoulders or none at all.

Lakeshore Rd. takes us into Mississauga and past the Rattray Marsh Conservation Area, where local residents prevented the wetland – a crucial wilderness area for fish and migrating birds – from being turned into a housing development. It was an example of how Ontarians have reclaimed their lake and defended the wilderness.

We roll past the many lakeside parks of western Toronto, including Marilyn Bell Park (she was the first to swim across the lake and did it at the age of 16) and Ontario Place, and onto busy Queen’s Quay to the foot of York St. Here we stop to have coffee with Waterfront Trail executive director Marlaine Koehler, who led the launching of the project 17 years ago, and Vicki Barron, director of administration and regeneration initiatives.

After coffee, we breeze along the paths and residential streets of eastern Toronto and take Kingston Rd. to Pickering where we book rooms in a motel – after a day of 92 kilometres – and then chow down on Japanese cuisine at a nearby restaurant. The owner shows us a piece of Kobe beef costing $150 a pound because of the animal’s diet of beer and daily massages. It sounds like my kind of life, and I estimate that at 175 pounds I would be worth $26,250.

Day 3: The next day takes us on paths around the Pickering and Darlington nuclear generating stations, with high-security chain-link fences and signs stating there are 24/7 armed patrols. We also pass the Wesleyville oil-fired power station, a $245-million facility that has never functioned since it was built 30 years ago. A white elephant – it’s not something you expect to see in the Ontario wilderness.

We spend a lot of time on quiet country roads, and, after 117 kilometers, we arrive at Victoria Park on the waterfront in Coburg, where we set up our tents.

It’s the Thursday before the Victoria Day weekend, and most spots have been taken over by recreation vehicles at a cost of $2,050 for the season. There is a 10-year waiting list for a spot.

Day 4: On Friday, we hit Kente Portage, the oldest road in Ontario, before joining busy Highway 2 for the ride through Trenton air base, which seems to go on forever. We complete 85 kilometres on arrival at our hotel in Belleville.

Day 5: The scent of lilac is in the air as we make our way through Prince Edward County. Highway 62 takes us to Highway 33, the Loyalist Parkway, and through Picton, “A Proud Loyalist Town,” as the sign proclaims.

The union jack flies with the Canadian flag at the Glenora ferry and the ride across the Bay of Quinte and the road to Kingston. It rains for much of the next two hours, and we are soaked on landing at a residence of Queen’s University after 86 kilometres.

Day 6: We sall along the St. Lawrence Parkway with a stiff wind at our back, arriving in Iroquois after pedalling 131 kilometres. We stop just before more rain begins to fall. After cleaning up, we head over to the Monte Cristo restaurant for steaks. The meal was compliments of Doug Taylor, one of our group, whose brothers-in-law joined us.

Day 7: The rain is still falling and we head off after a large breakfast at the restaurant. Wrapped in rain jackets and pants, we pedal through Cornwall and along the river, arriving six hours and 100 kilometres later at Rivière Beaudette.

The Waterfront Trail is well marked with signs and regional maps at convenient sites along the way. Cyclists (or hikers) can chart the route from Niagara-on-the-Lake with The Waterfront Trail & Greenway Mapbook. It is published by Dun-Map Inc. and is available by ordering online at http://www.waterfronttrail.org. Or you can download free maps of each section at the same website.