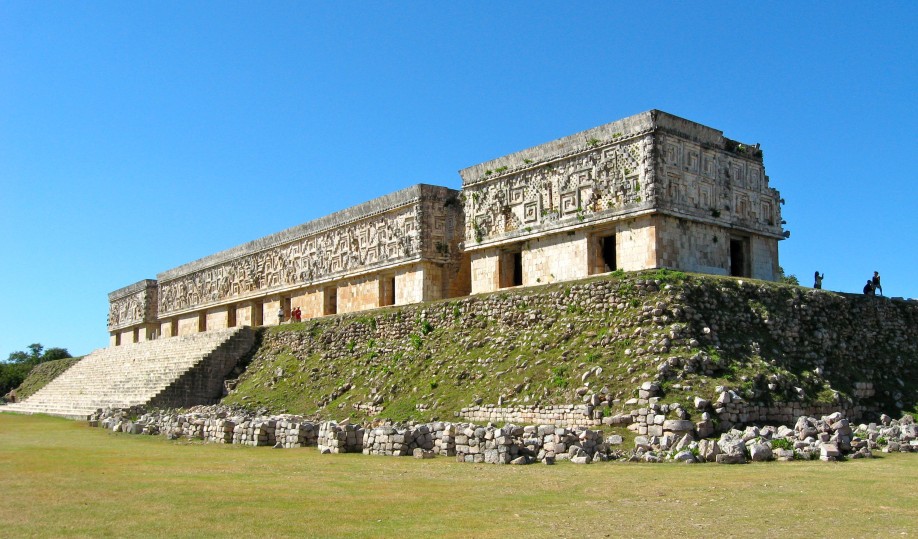 Our walk along the Yucatán beach on the Gulf of Mexico is turning into a voyage of discovery, despite the fact that we are a half-hour drive from the closest Mayan ruins.

We stride by fishing boats leaning over in the sand and wave at fishermen
returning with coolers full of grouper, which will end up on dinner plates in
nearby homes and restaurants in the port city of Progreso.
We pick up shells washed up by the tide and stop to take pictures of kids
playing soccer in the sand. It all seems very ordinary, but the backdrop is
not.

Beach house on the Gulf coast of Yucatan near Progreso.

What really blows us away are the extravagant beach houses, complete with
pools, palms and huge windows, that go on and on as we head for
the village of Chicxulub, six kilometres up the coast from Progreso.
Many of the houses are owned by wealthy people in Mérida, the handsome
colonial capital of Yucatán state. They are evidence that the descendents of the
Maya, who built fabulous cities throughout Central America before the
arrival of the Europeans, are still amazing builders with a penchant for
bold architecture.

They serve as second homes for rich people and their staffs – even the units
in low-rise condo buildings in Progreso come complete with maids’ quarters.
The houses are occupied mainly in the summer when the heat in Mérida, 30
kilometres south of Progreso, becomes stifling and residents head to the
Gulf coast seeking relief provided by the ocean breezes. Apart from that,
the houses are used by the owners during holy week (semana santa) when
Easter celebrations become non-stop parties.

That leaves almost 10 months of down time for these mansions and a golden
opportunity for people from the north seeking the sun. A clutch of
bargain-wise Canadians has discovered that there are good deals to be had
renting these mansions. They
have become winter bases for the snowbirds – many of them retired – who have
decided to take a pass on cold, snow and slush for several weeks or even
months.

Many arrive here by flying directly to Cancún, the main centre of the
adjacent state of Quintana Roo and the raucous hub of the Mayan Riviera, on
the other side of the peninsula. Some rent cars for the trip to Progreso,
but we hopped aboard an air-conditioned bus for the four-hour ride to
Mérida, making the last leg to Progreso by taxi.

The port is on what is called the Costa Esmeralda, and here they roll up the
Malecón, the wide sidewalk along the beach, early in the evening, compared
with the noisy nightlife of Cancún and the rest of the Mayan Riviera.
We meet some of the contingent of Canadians when about 60 of them gather
for the weekly happy hour that takes place every Saturday at the Hotel
Yakunah in Progreso.

The owners, Elke and Gerben Hartskeerl, a Dutch couple, acquired a rundown
house a block from the beach four years ago and have turned it into a small,
but chic hotel that has become a sort of community centre for expatriot and
visiting Canucks. Over the course of a week at the hotel last January, we
met people from Alberta, Ontario, New Brunswick and Quebec.

The couple from our area, a retired Montreal fireman and his wife, drove for
six days in their car to reach Progreso and were in the middle of a stay
lasting several months. They had dropped into the hotel to make a call home
on the satellite phone.

But I could not speak to them long because I was in negotiations with a
local taxi driver – his name is Ramón – for a day trip to the old Mayan city
of Uxmal, whose structures inspired Frank Lloyd Wright and other
contemporary architects.

But first, Ramón organized a visit to the nearby ruins of Dzibilchaltún, a
sprawling site a half hour away by car.
With its low-rise buildings, it is not as well known as Chichén Itzá or
Uxmal, but it attracts good crowds when there is a cruise ship docked at the
end of the Progreso pier, which pokes eight kilometres out into the Gulf of
Mexico, a testament to the construction prowess of the modern Maya. 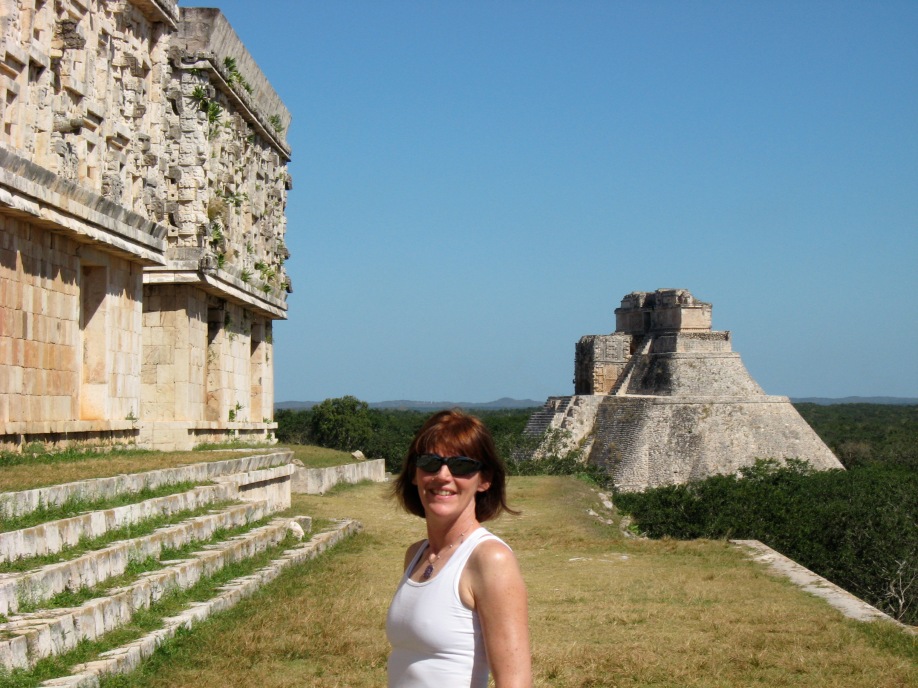 Pyramid of the Soothsayer at Uxmal rises 35 metres (behind my wife Stephanie) and is 11 metres higher than Chichen Itza.

At Dzibilchaltún, we follow guides showing visitors through the museum and
then the buildings on the site where an estimated 40,000 people once lived.
The centrepiece is the temple of the seven dolls, which has been aligned to
the spring and autumn equinoxes. Locals and tourists alike gather on March
21 and Sept. 21 to watch the rising sun shine through the doors of the
temple.

Many people stop at Xlacah cenote at the end of the tour for a swim. It’s
one of thousands of sink holes dotting the Yucatán, which has no visible
rivers. Fresh water runs under the limestone crust and surfaces in the
cenotes.

Two days later, Ramón picks us up at the hotel bright and early, and we head
for Uxmal, 90 minutes away in the Puuc hills south of Mérida.

Our guide, Jorge, takes us through the ruins, which were discovered
overgrown by the jungle in 1935 and points out the intricate and
impressionistic figures of jaguars, snakes and turtles that make up the
fabric of the underworld of the Maya. There are also faces of priests and
flowers representing the third eye.

Carved into the stone of the buildings is much lattice work, something that
I had only associated with big-box hardware stores up to this point.
We are not allowed to climb the pyramid of the Soothsayer, the highest
building on the site (climbing was banned more than two years ago), but we
clamber over most of the other structures as Jorge explains their
significance.

There is no cenote at Uxmal. Instead, the Maya collected rain water and
stored it in underground cisterns, another testament to their expertise in
engineering, which goes along with their detailed knowledge of astronomy and
their boundless imagination in creating myths and stories.

Jorge also tells us that his name is Yorich in the local Mayan language, one
of the frequent references that local people make to their heritage.
The buildings were also constructed in such a way as to provide echoes for
claps and voices.

Ramón takes us next to the nearby caves at Loltún, an underground labyrinth
of interconnecting caverns stretching for two kilometres, full of
stalagmites and stalactites and lit by motion-sensitive lights.
Our guide for this adventure is Ricardo, who explains that the caves were
most recently used by Mayan slaves escaping Spanish landowners.

Archeologists, who have found bones of extinct animals such as the mammoth,
have determined that there is evidence of human activity going back 7,000
years.

There are drawings on the walls, while some columns give off bell-like
sounds when struck with a fist. Near the reception centre is a huge stone
phallus that was transported from a site nearby where it was originally
found.

We pile back into the taxi with Ramón for the ride to the village of Mani,
specifically the Tutulxtu restaurant, for a late lunch. We start off with
corn chips with guacamole dip, and Ramón orders several dishes called poc
chuc, which consist of lime soup, pork and chicken along with salad, a
fitting restorative after a long day.

My wife and I also take time for a trip by air-conditioned mini-bus (the
cost is about $1.30 each) to Mérida, which has been built in the Spanish
colonial tradition and is now the economic, political and cultural centre of
the peninsula.

We stroll past the magnificent Cathedral of San Idelfonso, built with the
stones of dismantled Mayan structures, on the main plaza, whose trees
attract thousands of noisy birds coming to roost for the night.

And we walk through the nearby university before stopping at a courtyard
restaurant for dinner.

While the ruins and the beach houses gave us a great look at the
construction abilities of the Mexicans, our arrival at Chicxulub following
the hike along the beach reminded us of the astonishing destructive power of
the universe.

As laughing schoolchildren swirled around us practising their English, we
stumble on a plaque in the village plaza describing how a giant comet
slammed into the earth here 65 million years ago causing a major disruption
of the climate and the possible extinction of the dinosaurs.

The comet ended much of the life as it was then lived on the planet, but it
was not the end of the world and we can view more recent earth-shaking
events in that light.

There are frequent ADO buses (comfortable and air conditioned) to Mérida. A
one-way trip costs from $25 to $30.

We saw military posts along the highway with well armed soldiers, a not unusual sight in Mexico. We have not seen violence of any kind on several trips to this part of Mexico.

The biggest problem in Progreso will likely be the presence of stray dogs,
which survive by deferring to humans. However, it is best to exercise
caution and common sense.

If you take your cellphone and plan to call home, verify with your service
provider before leaving that you can access the local network.

If you want an idea of the real estate market in Yucatán, go to the online
magazine Yucatan Today (yucatantoday.com and click on destinations and then
real estate). It has a ton of information on Yucatán life.

Celestún is the place to see flamingos. There is lots of information on this
ecological site at Yucatan Today.