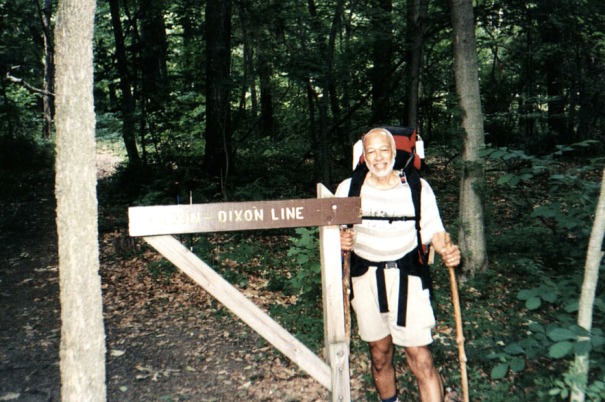 Ralph Kendall takes a break as he hikes along the Appalachian Trail in the U.S. (Photo courtesy of Ralph)

What would make normally sensible people want to hike up and down hundreds of kilometres of the Appalachian Trail, which stretches from Georgia in the southern U.S. to Maine in the north east?

Perhaps this excerpt from a letter that Ralph Kendall sent to his wife will
help explain the release that some feel when they reach retirement: “I think
of all the years sitting an an office in Nairobi doing a task that I
considered to be without merit but realizing it could help put money aside
so the dream could cease being just a dream and at last become reality.”

Kendall, a former Montrealer who worked for the International Civil Aviation
Organization in Africa for almost 15 years and also spent several years in
what is now Iqaluit on Baffin Island in Canada’s Arctic, wrote that passage
100 days into his Appalachian adventure.

That was some years ago, and Kendall, then 63, spent parts of four summers
navigating the trail along the spine of eastern North America.

Kendall, an avid cyclist, hiker and cross-country skier, is part of a
growing group of people who embrace retirement with a burst of energy thanks
to a life of physical activity, an almost unlimited window of time to pursue
a major test of endurance and a rigid determination to make a long-held
dream come true.

On the advice of his wife, Rhonda, Kendall wrote to the Appalachian Trail
Conference, the governing body of the trail, looking for a partner. He was
soon hooked up with Romalis Ellis, then 65 and an out-of-shape former U.S.
military man who had served in Korea and Vietnam. It was a one-in-a-million
chance, according to Kendall, because both men are black, and, as he found
out later, the likelihood of seeing another black person on the trail is
very slim.

The fun began at the trailhead at Springer Mountain, Ga., near Atlanta, in
1997. “I was in shape and Sarge (Ellis’s nickname from his military days)
was not,” Kendall said.

Standing 5 feet 10 inches, Ellis weighed 243 pounds and had high blood
pressure. By the time the pair reached Virginia, Ellis had dropped to 195
pounds and his blood pressure was normal.

At 6 feet tall, Kendall thought he was in good shape, weighing in at 210
pounds. But he quickly lost 19 pounds.
Both men started off carrying packs that weighed 65 pounds or so, a struggle
even for Kendall. On the first day, Kendall forged ahead on the trail and
dropped his pack, going back to help Ellis with his. By the end of a week,
they both stripped their packs down to 45 pounds. 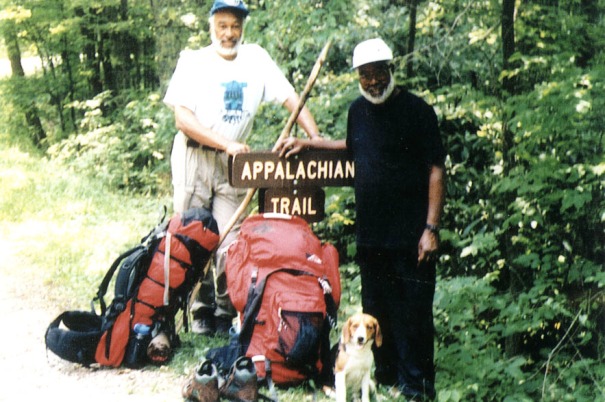 Ralph and Sarge, Romelis Ellis, and their trail companion.

“We left a little pile of stuff at the side of the trail,” Kendall said. “We
didn’t need two stoves or two water filters, just one of each.”

On a trail that goes up and down – it rises in places to more than 1,980
metres (6,500 feet) above sea level – there were definitely some highs and lows.

The figurative low point may have been reached in the Smoky Mountains in
North Carolina. “People raved about the views in the Smokies but we didn’t
see a thing because we were right in the clouds,” he said. “It was cold, wet
and miserable” as the pair endured 14 straight days of rain.

What was most impressive about the trail was the kindness of the people they
met along the way. “Sometimes you would meet trail angels,” he said. “A
couple would show up at your camp site with a case of cold Cokes and hot
dogs.” It was a welcome treat for people surviving day after day on
freeze-dried meals.

As for spending so much time with a person who had been a stranger before
the hike, Kendall said everyone gets on the same wavelength once they start
walking. “We just clicked,” he said.

The same thing happened next summer when he returned to continue the hike.
Kendall met three men from Boston (all recently retired) when he rejoined
the trail at Waynesboro. They stayed together until they reached Carlisle,
Pa., about six weeks later.

In the summer of 1999, Kendall covered a long portion to High Point, N.J.,
by slack-packing. His wife would drop him off at a spot on the trail each
morning minus the big pack, and he would walk to a predetermined spot where she would pick him up
late in the afternoon and they would spend the night in a motel or camping
in a state park.

In 2002, Kendall got together with two of his Boston buddies for the
100-mile Wilderness, the 160-kilometre leg to Mount Katahdin in Maine, the
northern terminus of the trail.

“My advice is if you want to do it, just do it,” he said. “You’ll find
like-minded people” to hike with you along the trail.