Independent spirit on a bike 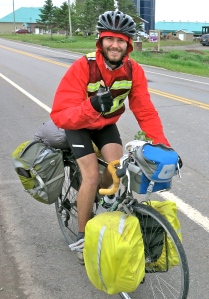 It's hard to imagine a person of a more independent spirit than Andrew Alford, whom I met while pedaling along Highway 132 in the Lower St. Lawrence region of Quebec last week. It was raining and Andrew was wrapped in a red rain jacket with his helmet over his hood.

He was pedaling an old Trek bike with four paniers and a tent and other gear stacked on his rear rack. He was not travelling light, but then he planned to be on the road for a long time. A resident of Pickering, On, Andrew had cycled up to Pembroke and then on to Montreal where he stopped for a few days before moving on to Quebec City. After a side trip to La Malbaie in Charlevoix County and its stunning mountains, he crossed the St. Lawrence River and was heading to the tip of the Gaspé Peninsula before riding to his final destination of Halifax, NS.

He was staying at farms along the way doing research on cooperative farming and with people he had contacted through http://www.warmshowers.org. It’s a community of couch surfing for cyclists.

Andrew later joined us for lunch in the parking lot opposite the church in Kamouraska and then we wished him well on his trip.

My story about the 8-day cycling trip six friends and I took on the Route Verte along Highway 132 from Lévis to Sainte-Flavie, just inside the Gaspé Peninsula, and back will be published in the Montreal Gazette in late July. The working title is the Crustacean Cruise and will touch on the wonderful seafood we consumed. Stay tuned.

I have hiked and biked through Nepal, Cuba and Mexico. I also maintain a busy schedule of adventure traveling in Canada. Many stories in the blog were originally published in the Travel Section of The Montreal Gazette. My web site is: https://davestravelsblog.wordpress.com